What really went wrong at Suez Canal and how to prevent it in the future?

The Suez Canal is the shortest maritime route from Europe to Asia, making this route a vital facilitator of global trade. The canal is responsible for connecting Port Said in the Mediterranean Sea to the vast Indian Ocean through the city of Suez in the Red Sea. By eliminating an arduous journey of circumnavigating Africa for trade between Europe and Asia, the canal reduces costs and cuts voyage time by days or weeks.

Considering that almost 90% of the world’s goods are transported via ships, the Suez Canal is a catalyst for global trade. The canal carries more than 10% of global goods, including 7% of the world’s oil. Accounting for 30% of the world’s daily shipping freights makes it the most important trade route between Europe and Asia. An estimated 19,000 vessels passed through the Suez canal last year alone, according to official figures.

During the week of March 23rd 2021, for six days, the Suez Canal was blocked, causing billions of dollars in loss by disrupting the global supply chain. A giant ship stretching over 1,300 feet got stuck in one of the world’s most vital shipping lanes. Reportedly, the EverGiven ship began to swing from side to side, in the event that’s referred to as seafaring, where the stern of a ship tends to swing towards the bank while the bow is pushed away from the back. The size of the ship caused it to get stuck and immediately impacted the movement of goods through the canal.

The giant vessel EverGreen caused massive congestion as ships could not pass, with over 200 other vessels stuck at either end of the Suez canal. This congestion at the Suez Canal took a massive hit on the global supply chain. Goods worth billions were stuck at sea for days, taking 6 days until the ship was finally freed on Monday. Weeks later, the congestion was yet to be cleared as ships slowly made way from either end of the canal to their destinations.

Close to 400 ships, bound on their journey to either side of the globe, were being freed one by one. At the same time, there are numerous inbound ships which pose a challenge to clearing the stuck shipments before they arrive. This incident is a classic example of how supply chain visibility, logistics analytics, and tracker software are vital to modern logistics operations and shipments. Arguably, the inclusion of an advanced transportation management system could have prevented the congestion at the Suez Canal, while inbound and outbound ships would be aware of the next step to take in the face of adversity.

How could a transportation automation platform have prevented the incident?

If the pandemic has taught us anything, it is that some acts of nature will always be beyond our control but we need to be prepared for everything. Even in the Suez Canal incident, no system can 100% full proof accidents but our current systems have massive scope of improvement and better visibility is one key aspect. EverGreen got stuck but to add on top of it, lack of communication between shipping networks and global trade points resulted in more ships entering the Suez Canal causing a massive congestion. There is tracking software on ships but most of it legacy software which needs the power of new-age technology to solve more sophisticated problems. Tracking software integrated with AI & ML algorithms offers better supply chain visibility, thereby allowing other ships en route to making a more informed decision when an incident occurs and this data also helps in streamlining routes once the Canal opens up.

The latest software technology has proven to be the ideal solution to many challenges faced in long-distance and large-scale logistics operations. More companies are investing in high-performance software and analytical tools to make business better. Let’s explore features of the LogiNext transportation automation system that are extremely handy in the event of such an incident in the future. 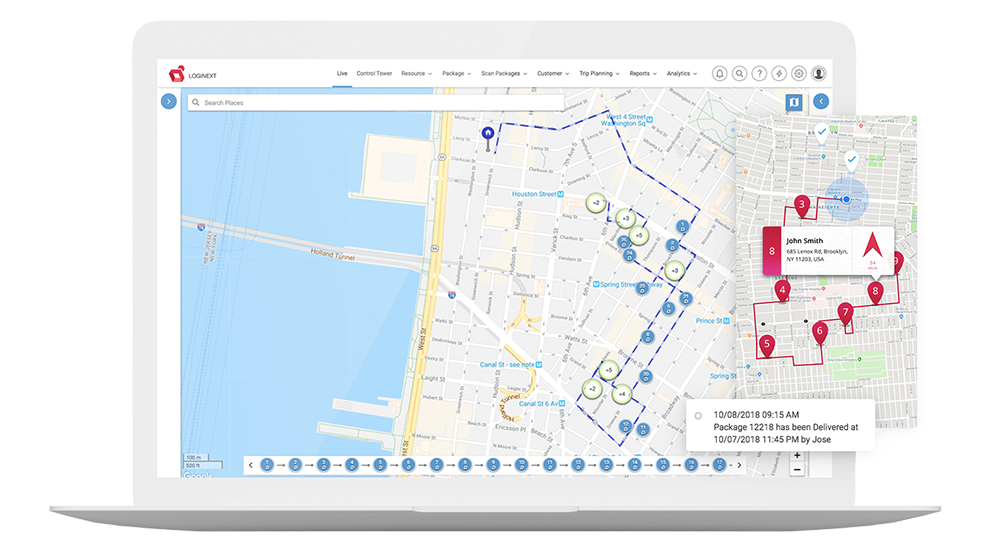 LogiNext is an advanced all-mile transportation automation platform, which forecasts efficient route planning with real-time data constantly being fed into the system. With a framework to optimize trade routes and identify real-time challenges, every shipment is a step closer to its destination with accurate data.

2) Complete visibility over the supply chain

Supply chain visibility emerges from logistics analytics of a vast database that pertains to the movement of goods globally. With advanced AI & ML algorithms in place, supplier visibility can ensure that shipments are tracked in real-time. This can help ports prevent outbound shipments towards congested canals like the Suez Canal incident of 2021.

The technology engine is built to learn from historical data and make appropriate decisions in the future. These are helpful post accidents like the Suez Canal incident, for instance, in which particular order the ships should be released to clear the backlog. The AI-powered framework syncs with a vast global database to create an accurate map of solutions for logistics operations. The software can help transporters, logistics operators, port authorities, and personnel on the ship with accurate data to make a more informed decision.

With the correct data and a smart platform to automate transportation, a lot of challenges can be forecasted and resolved on time. Thus, LogiNext equips logistics operations with an AI-powered transportation automation system that boosts efficiency and saves time.

23
Next Story : The giant Indian SaaS wave will take over the world by 2025